About the Chapman Motor Family

Find out why the Chapman Family has been the Number 1 Dealership in the Cedar Park and Greater Austin Area.

Find your local dealer and shoot us an email or phone call. The Chapman Motor Family will be more than happy to help with any, and all, questions you might have. 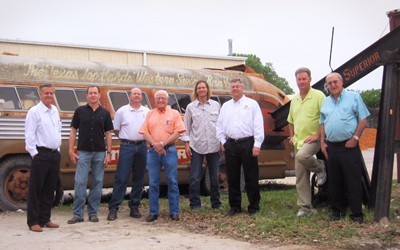 The Chapman family of used car dealerships has been a central Texas tradition for over 50 years. Our 12 Austin used car locations are owned and operated by two generations of Chapmans and in-laws. Since the late 1950's we have been proud to serve the greater Austin area, offering the best combination of affordability, customer service, and dependable used cars possible.

The Chapman Motors story begins in 1954 when Don Chapman moved from Lamesa, Texas to attend the University of Texas. Don Chapman, always the entrepreneur, began selling cars in 1959 for Les Pollard at Republic Motors. Doyle and Bill Chapman soon followed Don to Austin and by 1970, all three were entrenched in the car business.

By 1980, Kyle Chapman had begun working for Don, and Kyle was followed by Steve, Larry, and eventually Greg Chapman. Kanton Labaj of Third Coast Autos married into the family and has been a big part of our growth in Central Texas.

The Chapman Keys to Success

Now over 50 years since Don first entered the car business it is clearer than ever that the foundation of our continued success lies in a simple formula: customer satisfaction and repeat business. The Chapman family has always put our customers first. This commitment has led us to offer financing for those customers turned down for car loans by conventional lending institutions.

Each of our 11 locations offers in-house financing with on-site approval, and without the huge mark-ups charged by other second chance financing car lots. At Chapman Motor Sales, we understand that our success relies on you, the customer. To that end, we pledge to work hard to ensure your continued satisfaction by providing dependable, affordable used cars for Central Texas.

As everyone knows, the Chapman name has become synonymous with our Camel. Few people know the real story and we hear this question quite often: "so why the Camel?" Our standard answer is, "Dependable Transportation, of course". However, while this may be true, the real story is fairly simple.

A fan of exotic animals, Don Chapman back in the early 80's used a live camel to attract attention at his 5th and Rio Grande St. location. Seeing the reaction to the camel, he also used "Earl the camel" in a TV commercial. This seemed to catch on. Then Kyle, who was working for Don at the time, designed and used a camel logo on his business cards and the camel soon became a permanent mascot. Now, people cannot think of Chapman Motors without thinking of the camel.